Today, most scoliosis clinicians agree that school screening for scoliosis would be a positive step to take – for relatively little cost, significant benefits can be obtained for the majority of patients. Screening for scoliosis in schools and other groups, like classes or clubs is quick, easy and cheap. Using our ScolisScreen app, its also possible to pre-screen a friend of family member at home in less than 5 minutes. Early detection of a developing scoliotic curve means it is easier to treat and has a more successful outcome.

It’s for this reason that scoliosis screening is considered as a beneficial stage of treatment amongst the Orthopaedic community, as it is reported in the Consensus Paper which has been published by the Society on Scoliosis Orthopaedic and Rehabilitation Treatment (SOSORT)[1].

For years, clinicians have argued that school screening would be the best way to maximise the benefit of what we now know about scoliosis – Despite this, school screening has still not been routinely performed in the UK for many years. At the UK scoliosis clinic, we strongly support school screening – which is why we have an ongoing outreach program designed to provide exactly this service.

The main arguments against scoliosis screening in schools have been the associated cost, and the possibility of false positives.

Let’s take the cost issue first. It’s fair to say that in the past this argument carried weight – historically It was thought that surgical approaches were the only effective treatment for scoliosis, although some of the studies which informed this opinion were actually highly problematic[2]. Based on this assumption, early detection of scoliosis was not thought to be especially useful, with the argument following that the expenditure was not justified.

The argument that only surgery was an effective treatment for scoliosis also resulted in the argument that a child can simply wait until the curve is severe before it is detected – this means that the child will in the end require spinal fusion. However, this is not in line with the current thoughts of leading world experts from SOSORT and the Scoliosis Research Society (which include the world’s leading scoliosis surgeons).

They both recommend that bracing should be performed as a first line defence against scoliosis progression. When results were published from the BRAiST study in 2013[3], 58% of observed patients had curves greater than 50° at skeletal maturity, while only 25% of braced patients reached curves over 50°. This meant there was a 56% reduction of relative risk to surgery levels in braced patients and treatment costs for braced patients were less than those requiring surgery.

There are some significant issues with this argument however –  firstly, the evidence on which this approach was based was initially conducted all the way back in the 1940s[4] so it makes sense for us to re-examine the evidence and technology we now have available.

Secondly this research did not actually seek to define the cost of scoliosis screening on an individual basis – nor did it do so in the context of the kind of quick and easy screening which is available today, so any judgement about the cost is highly subjective.

In actual fact, we do now know exactly what scoliosis screening in schools would cost on an individualised basis – research carried out between 2000 and 2007 demonstrated that the direct cost for the examination of each child who participated in the program for the above period was just 2.04 €.[5] It is reasonable to suggest that costs today could be even lower! 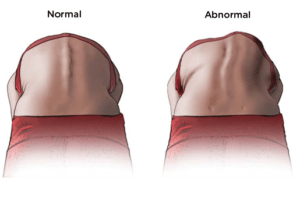 The Adams test is a simple test for scoliosis

At the UK scoliosis clinic, our scoliosis staff have specialist scoliosis screening training which allows us to screen scoliosis with a high degree of accuracy. Essentially, preventing false positives comes down to properly trained staff using appropriate methods. The best screening services will therefore always be those offered by scoliosis specific clinics, but there is no reason that local medical staff could not be trained to improve their screening ability, taking into account the latest research just as we do at the clinic.

Getting screening right relies on really understanding the way scoliosis and the spine work – For example, by screening children in sitting position with the use of a scoliometer, the number of false referrals can be decreased dramatically because the effect of leg length inequality and pelvic obliquity on the spine is eliminated. The sitting position reveals the true trunk asymmetry which could be associated with Idiopathic Scoliosis (IS)[6] – it is therefore one of our standard diagnostic tools.

Why we should screen

Aside from the fact that the arguments against screening no longer seem to stand up it’s also clear that screening for scoliosis in schools provides the best (sometimes only) opportunity for early diagnosis and therefore allows for non-surgical treatment, which is often not the case in the absence of screening[7]. 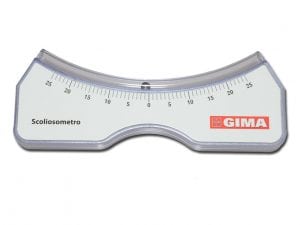 A scoliometer is used to measure scoliosis

Today there is significant evidence which shows that the number of scoliosis sufferers eventually requiring surgery can significantly be reduced where non-surgical treatment (such as scoliosis specific exercise, or bracing) is available on a high standard.[9][10][11] If we work from a modern viewpoint, rather than an outdated one, we can therefore see the real value of school screening. Indeed, school screening is often the only tool we have to detect mild and moderate spinal curves which can be easily treated with non-surgical methods.

The most recent research also confirms that this is more than just informed speculation – research does confirm that in areas where screening programs exist, fewer patients ultimately require surgery for IS.[12]

In 2006, research from the University College Hospital and The London Clinic[13] assessed the severity of scoliosis presentation over 30 years. What the authors found was, that since mass school screenings were abandoned in the 1990’s, in the year 2000 only 8% of patients had been identified at school compared to 32% in 1985 and that the number of patients presenting with curves greater than 40° had increased to 70%. This meant that for many of these patients non-surgical care would be less effective and the likelihood of requiring surgery was much greater. The author’s recommended that greater community awareness was required to enable earlier detection.

At the UK Scoliosis clinic, our guiding principle is to follow the latest research in order to treat scoliosis with the most up to date methods available. We’re therefore strongly in favour of screening in schools, and amongst higher risk populations such as gymnasts and dancers.

On our website you can find our free to use scoliscreen tool – which will help you to screen a friend or family member for scoliosis. This is a great starting point if you have concerns.

Professional and highly detailed (but totally painless!) screening is always available at our clinic – book in for a consultation and we’ll be able to determine if you have scoliosis, or if you might be at the risk of development. If scoliosis is detected, were ideally positioned to help.

[11] B Lee, The Correct Principles of Treatment of Angular Curvature of the Spine. 1872, Philadelphia, USA.

[12] T.B. Grivas et al.  “How to Improve the Effectiveness of School Screening for IS” The Conservative Scoliosis Treatment (2008) p 120