When first seeking treatment, many scoliosis sufferers are advised that they should “watch and wait” or  “wait and see” how their condition progresses, in the hope that their curve will remain small enough to avoid surgery.  Medically, this approach is known as “observation”.

Is observation ever the right choice? 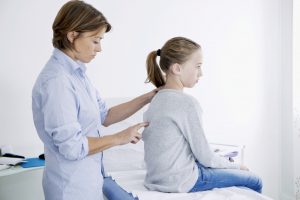 The argument for observation was once much stronger than it is today – for much of recent history the consensus view has been that surgery was the only effective way to treat scoliosis and since surgery is obviously best avoided wherever possible, observation is the only other choice. Although surgical treatment was once the only option for scoliosis sufferers, this is no longer the case – today non-surgical approaches are highly effective, meaning that observation is probably never the right choice.

Today, non-surgical treatment from scoliosis consists of two major approaches, exercise-based and bracing. Scoliosis braces are the most effective non-surgical method for reducing cobb angle[1]. There are many different kinds of scoliosis brace and the way they work is different, however broadly speaking braces can be classified as active correction braces (which aim to reduce scoliosis by guiding the spine back to correct posture) and passive braces (which aim to prevent scoliosis from developing any further by holding the spine in its current position).

Exercise methods such as the Schroth method (remove comma) or SEAS focus on teaching the scoliosis sufferer to self-correct their scoliotic position. Schroth and SEAS can both be effective as a standalone treatment for smaller curves and is often paired with bracing for superior results.

In both cases, however, catching scoliosis early with screening, and then taking appropriate action to stabilise and correct the Cobb angle is the key to a successful outcome. Unfortunately, many medical professionals today are still unaware of the non-surgical options for treating scoliosis and how effective they can be – unlike 20 years ago, today the prognosis is a good one.

Why observation does not work

Simply put, Observation is not a treatment for scoliosis, it is simply the act of watching and waiting, hoping the condition does not worse – however recent research has shown that scoliosis almost never resolves without treatment.[2] While it was once thought that scoliosis would not always progress, modern research has demonstrated, for example, that Juvenile scoliosis greater than 30 degrees increases rapidly and presents a 100% prognosis for surgery. Curves from 21 to 30 degrees are more difficult to predict but can frequently end up requiring surgery, or at least causing significant disability.[i]

Because observation is not a treatment, it most often leads to the patient requiring surgery and does not promise any improvement. By contrast, modern bracing technology allows for highly effective treatment, such that it has now been demonstrated that conservative treatment with a brace is highly effective in treating juvenile idiopathic scoliosis. In one recent study of 113 patients, the vast majority achieved a complete curve correction and only 4.9% of patients needed surgery.[ii]

What should I do if I have been prescribed observation?

If you have been diagnosed with scoliosis but have been advised that observation or “wait and see” is the best approach, the best option is to book a consultation with a scoliosis specialist. Even if your condition is not serious enough to merit bracing, some targeted scoliosis specific exercise can, at the very least, help to prevent the curve from developing further rather than simply allowing it to increase.

[1] Yu Zheng, MD PhD et al. Whether orthotic management and exercise are equally effective to the patients with adolescent idiopathic scoliosis in Mainland China? – A randomized controlled trial study SPINE: An International Journal for the study of the spine (2018) [Publish Ahead of Print]