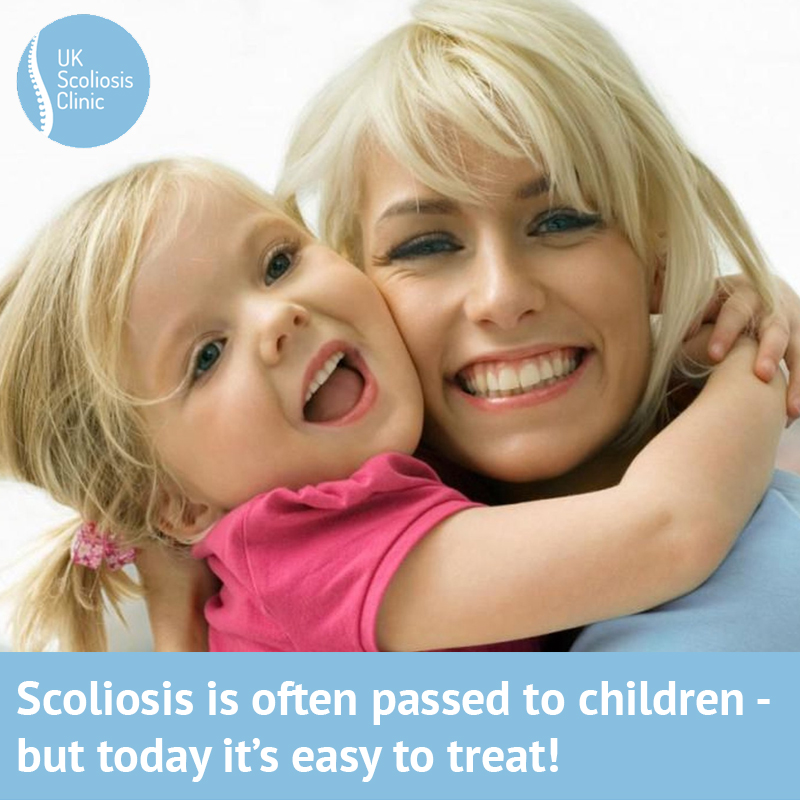 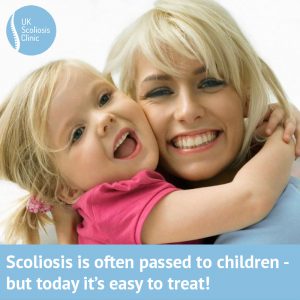 One of the questions which scoliosis sufferers often ask is as to whether they would be likely to pass scoliosis on to any children they may have. This is a good question since research does suggest that scoliosis (like most conditions) can run in families. Having said this, much more research is required before we can give a definitive answer, but here’s an overview of the latest thinking.

Before answering this question its important to remember that in children at least, 80% of all scoliosis cases are still considered idiopathic  – this literally means “without known cause” – so while we can make some useful observations on this topic, science is yet to form a complete conclusion, and that should be kept in mind.

It’s also important to be clear about the kind of scoliosis which is being discussed here – the causes of some forms of scoliosis are known. For example, de novo scoliosis in the over 60’s is caused by degeneration of the spine, while other genetic and neurological disorders (which certainly can be communicated to children) can also cause scoliosis. Here, we’ll be discussing the 80% of cases which are currently considered “idiopathic”.

One thing certainly has been established with clarity – results show that no ethnic group seems to be invulnerable to scoliosis, as is the case with some genetic conditions. Research suggests that whatever your heritage, scoliosis could be a risk.[1] 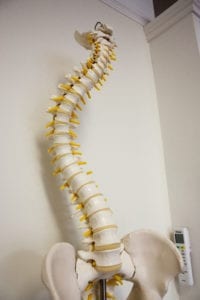 Perhaps the best way to study the importance of genetics in the inheritance of a certain condition is through the conduct of twin studies. Because of the unique relationship which twins have, they help researchers to examine the overall role of genes in the development of a trait or disorder.  Comparisons between monozygotic (MZ or identical) twins and dizygotic (DZ or fraternal) twins are conducted to evaluate the degree of genetic and environmental influence on a specific trait.  MZ twins are the same sex and share 100% of their genes.  DZ twins can be the same- or opposite-sex and share, on average, about 50% of their genes.

If MZ twins show more similarity on a given trait compared to DZ twins, this provides evidence that genes significantly influence that trait.  However, if MZ and DZ twins share a trait to an equal extent, it is likely that the environment influences the trait more than genetic factors.

So what do twin studies say about scoliosis? Such an approach has suggested that scoliosis may have a familial link since at least as early as 1922[2] and since then reports of multiple twin sets and twin series have consistently shown higher concordance (that is to say, similarity)  in monozygotic (MZ) compared to dizygotic (DZ) twins[3] – indicating a strong genetic link.  A meta-analysis of these clinical twin studies revealed 73% MZ compared to 36% DZ concordances[4]. Interestingly, in this series, there was a significant correlation with curve severity in monozygous twins but not dizygous twins. No correlation with curve pattern was found either, suggesting the importance of genetic factors in controlling susceptibility and disease course, but not necessarily disease pattern.

Will I pass scoliosis on to my children?

If research clearly shows that there may well be a genetic link, what are your chances of passing on scoliosis? One study[5] has tried to estimate the approximate chances, by comparing scoliosis prevalence with other common genetic diseases such as rheumatoid arthritis (RA), Crohn’s disease (CD), type 1 diabetes (T1D), or psoriasis vs the general population. The following table illustrates the findings and provides at least some broad context.

Therefore, research certainly suggests that if you have scoliosis, you do have a risk of passing it on to your children. Given the advances in treatment technologies however, this should not be a reason to put off having children in this day and age. Parents with scoliosis should of course be diligent with screening and monitoring for scoliosis, but in all fairness the same should go for all parents – not just scoliosis sufferers.