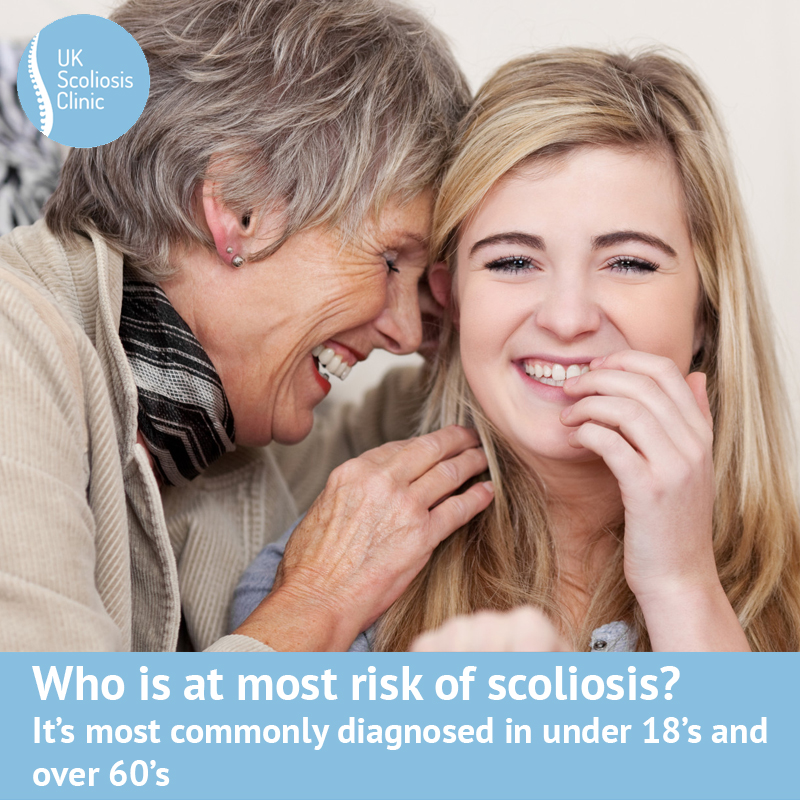 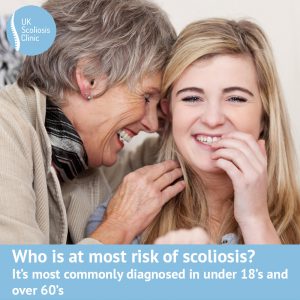 Scoliosis, like many conditions, is most common in certain age groups – and as a consequence, we recommend that these individuals be the most careful when checking for symptoms. The simplest answer to the question is that young adults are generally considered to be at the highest overall risk – but in fact, this question is a complicated one which is worth some discussion.

Scoliosis and age of diagnosis

Scoliosis is a difficult condition to diagnose – in large part, this is due to the complex nature of the condition and the fact it causes an individualised, three-dimensional shift in the spine. The rate at which scoliosis develops also varies, and is usually associated with growth spurts, rather than being steady.

One major challenge with scoliosis cases is estimating exactly when the condition began. Because scoliosis is very hard to detect (unless an individual is properly screened) until it has become large enough to cause visual distortions to the patient’s body, a diagnosis is often not made until the condition has existed for some time. Ideally, we would like to know when scoliosis began, as this has an impact on future prognosis – but in most cases, scoliosis is simply classified by the time it is diagnosed, not necessarily when it actually began.

Scoliosis in children is typically grouped into one of three types:

Scoliosis first diagnosed in individuals older than 18 is classified as adult scoliosis and could be either a case of scoliosis which has progressed undetected throughout childhood (common in younger individuals) or a case caused by degeneration of the spine and supporting structures, known as de-novo scoliosis. (Very common in the over 60’s)

Which age group is most at risk?

While much of the literature on scoliosis focuses on scoliosis in younger people, the statistics are clear – the most affected group is actually the over 60’s, mainly from De-Novo scoliosis. While about 3 or 4 % of young people suffer from scoliosis, nearly 40% of the over 60’s have the condition.

Adolescent scoliosis makes up the majority of cases in young people, somewhere between 80 and 85%. Whereas infantile and younger Juvenile scoliosis cases are more common on boys, 80% of all adolescent cases are girls. The very highest point for diagnosis is around 11-12 years of age in girls and slightly later in boys.

Risk of progression and severity – the key factors

If it’s actually older people who are most likely to suffer from scoliosis, why does most scoliosis treatment focus on the young? It’s an important question which goes to the heart of scoliosis itself and its treatment.

Scoliosis can vary hugely in its severity and its speed of progression – but in all cases, once scoliosis has started to develop, it generally does not stop until a young person has reached skeletal maturity. This means that the younger a scoliosis patient, the longer the condition has to develop to the point at which it becomes debilitating or requires major surgery to correct.  What’s more, scoliosis is closely linked to growth spurts – often worsening substantially over just a few months during a growth phase. Since younger children have much growth ahead of them, the risk of progression is significant.

It’s this risk of progression and the initial degree of the curvature which means cases in younger people are often considered as more serious – De-novo scoliosis, the form most commonly found in older adults, while a problematic condition, tends to be much less substantial in magnitude and much slower in progression. Addressing the problem can lead to a significant improvement in quality of life, but urgency is less of a factor.

By contrast, some research has demonstrated that Juvenile scoliosis greater than 30 degrees almost always increases rapidly and presents a 100% prognosis for surgery, whereas curves from 21 to 30 degrees are more difficult to predict but can frequently end up requiring surgery, or at least causing significant disability.[i]

Today, with modern bracing technology, it has been demonstrated that timely conservative treatment with a brace is highly effective in treating juvenile idiopathic scoliosis – and research has suggested drastically different outcomes. In one recent study of Juvenile 113 patients treated with bracing, the vast majority achieved a complete curve correction, and only 4.9% of patients eventually needed surgery.[ii]

While cases detected in adolescents do have less time to develop, they are often more severe once detected (they may well have began as a Juvenile anyway) and the high volume of cases in this age range means that this group are considered to be at the most risk. It’s thought that the changes which occur during puberty may be linked to the onset or progression of scoliosis, which may account for the spike in cases in this age range. If 3 or 4% of young people in this age bracket will develop scoliosis, that’s about one in each class at school and in most cases,  there will still be enough time for scoliosis to progress to the surgical threshold or at least cause significant disability.

So, who is at the greatest risk?

The answer to this question is simply that everyone should be aware of scoliosis, and take the simple steps needed to screen for the condition and address it early on. Our ScoliScreen tool is a great place to start.

Scoliosis in infants is certainly rare, but obviously presents the greatest possible opportunity for the condition to worsen over time. Juvenile scoliosis is also fairly uncommon, but the prognosis is not good if the condition is not treated early on. Most younger scoliosis patients are diagnosed as adolescents, meaning that children from 11-15, in particular, should be screened regularly.

Older individuals, while likely to develop a less severe form of scoliosis, have about a 4 in 10 chance of developing the condition over the age of 60.

If you are concerned about scoliosis, why not try out ScoliScreen tool, or get in touch today to arrange a professional consultation.