While the main non-surgical methods for treating scoliosis are bracing or scoliosis specific exercise, there are also a wide variety of complimentary therapies which can also be useful as part of a broader treatment program. One popular approach is Yoga. Yoga for scoliosis is a field which is being investigated, and there are some yoga specialists who do focus on scoliosis.

Research to date does not suggest that Yoga alone can correct cobb angle (curve severity). There have been some recent studies which have however suggested that yoga may have a positive role to play in reducing cobb angle as part of a broader program.[1]

Having said this, at least one case study has demonstrated a reduction in Cobb angle from 49 to 31 degrees – the problem is that in this case the progress was achieved over a period of 35 years[2], and of course, this is also only a single case.

How can yoga help with scoliosis? 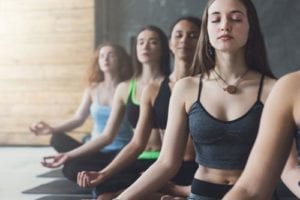 Yoga is an excellent exercise for general health

While yoga alone cannot reduce cobb angle, there are other benefits which Yoga can bring to scoliosis treatment. There’s is no doubt that some patients do report pain reduction and improved balance when practising yoga poses optimised to support scoliosis.  Scoliosis often causes the supporting muscles of the spine to become either too tight or too lose – and in this sense yoga poses which stretch muscles that have tightened and strengthen muscles that have become weak can certainly help to reduce pain and improve posture.

Some existing forms of yoga, such as Iyengar Yoga have been demonstrated to be effective in improving coordination and physical function in scoliosis patients[3], whereas some specialist programs are designed to reduce the symptoms of scoliosis have also been developed.

Is yoga recommended for people with scoliosis?

Like any form of exercise, yoga is an excellent way to keep fit and can assist in improving and maintaining mental health – these are great reasons for anyone to practice yoga. These reasons certainly also apply to those with scoliosis, although If you are a scoliosis sufferer, you should keep this in mind when choosing your specific yogic practices. Avoid movements which exaggerate or encourage a scoliotic posture and ideally opt for practices which actively oppose the curvature of the spine. Since asymmetrical muscle balance is a common problem for scoliosis suffers, it is also advisable to favour movements which improve balance and posture and concentrate on maintaining an even, rather than a contorted posture.

Whether or not you add yoga to a scoliosis treatment programme, will also depend on the age of the person. In a adolescent spine which is growing and characterised by flattening of the sagittal curves or a flat back and the severity of the scoliosis developing is associated with the degree of flattening, it would be inadvisable to perform movements that promote bending backwards and flattening the thoracic spine. Hyper-mobility and ligament laxity is common amongst adolescents with idiopathic scoliosis, so promoting increased flexibility with yoga would be inadvisable as it could further weaken ligaments and de-stabilize the spine lead to further progression.

In adults where scoliosis is well developed, growth has stopped and general stiffness is increasing with age, yoga may help to improve flexibility, balance and overall posture. Breathing exercises can also be incorporated to improve lung function and expansion. In these circumstances, yoga is more likely to be of benefit, rather than in the attempt to purely reduce a cobb angle.

There are some forms of yoga which have been developed specially for scoliosis sufferers and although they are relatively few in number, specialist yoga scoliosis practitioners do exist. These practitioners may incorporate some Schroth therapy and breathing exercises into their yoga and teachings. If you are interested in taking up yoga as part of a treatment program, consult with an expert in this regard, or speak with a scoliosis specialist first.

How does Yoga interact with scoliosis exercise? 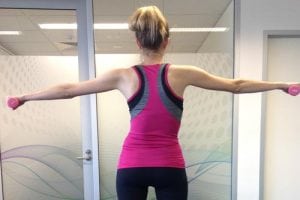 Yoga can help to improve awareness of the body