The UK Scoliosis clinic blog isn’t a political platform, but it’s clear for anyone in the UK to see that in many areas, NHS waiting times are a real problem. What’s perhaps even more of a problem are waiting times to see specialists (and therefore the time to access proactive treatment)  – or indeed, time wasted on a “wait and see” approach to scoliosis progression. The problem is that scoliosis is a progressive condition – if caught early it can often be treated without surgery, but if you wait too long, your options can narrow.

In most cases, scoliosis is a progressive condition – to be sure, there are some cases (mainly adult cases) where the risk of progression may be lower, but certainly, in children and young people, the rate of progression can be rapid.

Whereas cases of adult scoliosis (that is to say scoliosis which began in childhood and was carried into adulthood) increase in curvature by approximately 0.82° per year, the rate at which scoliosis increases in young patients depends upon risk factors such as the severity of scoliosis considering age, rigidity of curve, and family history. Research has demonstrated that Juvenile scoliosis greater than 30 degrees increases rapidly and left untreated presents a 100% prognosis for surgery, whereas curves from 21 to 30 degrees are more difficult to predict but can frequently end up requiring surgery, or at least causing significant disability.[1]

With scoliosis, there is, therefore, a very real need to act quickly and proactively if the condition is to be halted and the curvature corrected before either surgery is required, or full correction is no longer possible.

Wait to see your GP 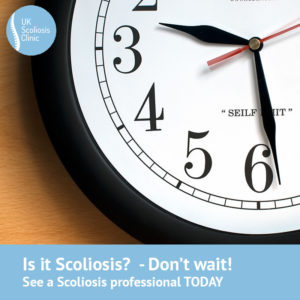 For most of us, the GP is the first port of call for all things medical – this is exactly how it’s supposed to be, and while we’re certainly not looking to criticise GP’s, there are a couple of points to keep in mind. Firstly, if you suspect scoliosis, consider the waiting time for a non-urgent appointment at your local doctor’s surgery – scoliosis suspected in younger patients can develop even over a few weeks, so no time should be spared in seeking an evaluation.

Secondly, it’s true that most GP’s do not have specialist training in Scoliosis – and where training is given, the message often reflects out of date attitudes to the condition – specifically, the outdated notion that scoliosis can only be effectively treated with surgery. Because of this, GP’s often lack the specialist training, time and knowledge of the treatments available to do anything other than refer you to a specialist, or, simply ask you to “wait and see”.

Wait to see a specialist

With any luck, a visit to your GP will net you an appointment to see a spinal specialist, who, when you finally do get an appointment, will certainly be able to diagnose scoliosis. The problem again is that you may wait many months for such an appointment, during which time scoliosis can continue to progress. Even once scoliosis has been diagnosed, many specialists will still recommend a further “wait and see” approach (which can sometimes last for years) in the hope that the scoliosis may resolve on its own. While this can happen in a very small number of cases, it is incredibly uncommon.

Some specialists are more sympathetic to scoliosis cases, and through training and awareness more and more health professionals are becoming aware of the non-surgical treatments available. You may be offered a brace to help stop scoliosis progressing at this point – but the options available through the NHS are currently limited.

Some specialists still take the view that scoliosis can only be treated surgically (this is false!) and other times you may be seen by a specialist once scoliosis has developed beyond 45 degrees, which is typically considered the threshold for surgery. Bracing and other non-surgical methods are certainly still possible up to 60 degrees however, and should still be considered.

Recent research by the British scoliosis society[2] has shown that even at this stage, most patients face another long wait for treatment during which scoliosis tends to progress. This 2018 study specifically looked at scoliosis progression whilst waiting for a consultation and eventual surgery. In the study, 41 females and 20 males with a mean age of 11.8 years with a mean Cobb angle (curvature) of 58° were followed –  Average waiting time to be seen in the clinic for an initial consultation was 16 months – thereafter, the average waiting time for surgery was 10 months. Rapid curve progression was seen in twelve patients, of which 10 required more extensive surgery than originally planned. Their mean Cobb angle at presentation was 48° which increased to a mean of 58° at surgery.

The “wait and see” approach to scoliosis was once prevalent – based on the idea that scoliosis could only be treated with surgery, doctors justifiably took the view that it was better to hope that scoliosis would not progress too much, and would put off the decision to undertake surgery for as long as possible. Today, however, the choice is very different – modern clinics, like the UK Scoliosis clinic, specialise in the non-surgical treatment of scoliosis and can reduce and often totally eliminate scoliotic curves through non-invasive techniques such as active bracing and scoliosis specific exercise.

While we certainly would not discourage you from seeking an opinion from your GP if you have concerns about scoliosis, we strongly recommend that parents of children or teenagers with potential scoliosis also make an appointment with a scoliosis specialist. Rather than waiting months, perhaps years, a scoliosis specialist appointment can usually be arranged with a few weeks, and non-surgical treatment can begin almost immediately.

Perhaps the saddest part about the study from the British scoliosis society was the specific data on the curves of the participants at the beginning of the research. The range of curves studied was between 17°–90°[3], and while a 90-degree curve would certainly be likely to require surgery, a 17-degree curve would almost certainly have not – indeed, a 17 degree curve would be an excellent candidate for the kind of conservative, non surgical treatment we offer at the UK scoliosis clinic.

By the end of the study, the smallest curve was  30°and the largest was 120°. While it is certainly easier to treat a smaller curve,  a 30-degree curve still has a good prognosis with modern conservative treatment through active bracing, such as scolibrace.  This study goes to show that the right information at the right time makes a significant difference in scoliosis cases.  Indeed –  in stark contrast to the above – one recent study of 113 scoliosis patients treated with non-surgical approaches showed that vast majority achieved a significant curve correction and only  4.9% of patients needed surgery.[4]

If you have Scoliosis, or have a child with scoliosis – consider getting a second (or first) opinion from a scoliosis professional, whichever stage of the process you are at!