Like all reputable clinics, the UK scoliosis clinic focuses the majority of its time and effort on providing the best possible treatment for scoliosis cases. For the most part, this means keeping up with the latest research, bracing and exercise based techniques which can assist in controlling and reducing scoliosis, however, where we also concentrate a lot of time and attention is to the psychological aspects of living with and being treated for scoliosis. 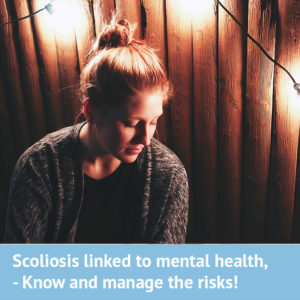 Like any condition, Scoliosis can obviously cause distress and concern – but there are some specific factors associated with scoliosis which may make the condition especially difficult for many patients to cope with. The key areas include:

With each of these concerns, the critical point to stress is that Scoliosis, if caught early enough can now usually be treated non-surgically and quite quickly, through bracing, exercise or a combination of both. The best possible way to detect scoliosis is through a routine screening, which can often allow the condition to be detected long before it has progressed to a significant degree.

There has been some limited research which has sought to understand the impact that scoliosis can have on a young person’s psychological health – although it’s still fair to say that only a small part of the literature relating to scoliosis considers this angle, there is still sufficient a body of evidence for us to draw some meaningful conclusions.

One such study looked at adolescents with and without scoliosis in Minnesota who were 12 through 18 years of age. During the study, six hundred eighty-five cases of scoliosis were identified from the 34,706 adolescents. The prevalence was therefore 1.97%  (incidentally, this is slightly below the average figure). The researchers wanted to calculate the odds ratio of scoliosis to some common psychological issues.

In a 2019 study, which compared scoliosis treatment approaches, the SRS-22 (a standardised scoliosis quality of life screening form) was used to explore the impact which treatment had on psychological health.  Here, researchers noticed that self-image was significantly improved amongst patients treated with a scoliosis brace, especially at a follow up after 12 months of treatment, this was especially interesting given the negative self-image association which is sometimes linked to bracing

Researchers found a similar improvement in patients treated with an exercise methodology –  all the SRS-22 quality of life subsets showed a slightly larger improvement across the three visits than bracing, although the correction of scoliosis was less.[2]

From the research which has been conducted, as well as our own experience at the clinic we feel it’s safe to say that scoliosis can be a significant risk factor for psychological health – especially in young people. While this certainly does not mean that everyone with scoliosis will struggle with mental health as a result, it’s clearly important that scoliosis clinicians are aware of the risk, and work to mitigate it.

At the UK Scoliosis clinic, we believe that properly researched information, coupled with effective treatment, applied as quickly as possible is the best possible way to address the psychological risks associated with scoliosis. It’s for this reason that we continue to recommend frequent screening throughout high risk years. It cannot be stressed enough that early detection, coupled with good information can go the majority of the distance in diffusing some of the  main concerns around a scoliosis diagnosis. We would caution parents and sufferers from relying on general advice or information pulled from the internet – the best option is by far a consultation with a scoliosis professional.

[2] Yu Zheng, MD PhD et al. Whether orthotic management and exercise are equally effective to the patients with adolescent idiopathic scoliosis in Mainland China? – A randomized controlled trial study SPINE: An International Journal for the study of the spine [Publish Ahead of Print]