For some time, it has been thought that common problems such as back and neck aches and pains were not a symptom of scoliosis. Even many scoliosis specialists did not necessarily consider pain to be an important indicator of a problem – however, over the last few years, various studies have demonstrated that back pain at least is correlated with scoliosis, and new research now also suggests that neck problems are a common issue.

Back pain and Scoliosis.

While it was once thought that back pain was not necessarily correlated with scoliosis (since scoliosis certainly can exist without pain) it has become increasingly clear that there is a link.

Indeed, research from the last few years has sown that spinal pain is, in fact, a frequent condition in scoliosis patients, further supporting the need for early detection and screening to minimise potential pain and suffering[1]. Furthermore, in one study of patients under 21 treated for back pain, scoliosis was the most common underlying condition (1439/1953 patients)[2] and in another of 2400 patients with AIS, 23% reported back pain at their initial contact[3].  Chronic nonspecific back pain (CNSBP) is frequently associated with AIS, with a greater reported prevalence (59%) than seen in adolescents without scoliosis (33%)[4], while patients diagnosed with AIS at age 15 are 42% more likely to report back pain at age 18.[5]

We also now know that part-time bracing in adult scoliosis cases can improve chronic pain[6] and that taken as a whole Scoliosis patients have between a 3 and 5 fold increased risk of back pain in the upper and middle right part of the back.[7]

At the very least, this evidence suggests we should reevaluate our view of the relationship between Scoliosis, and pain. 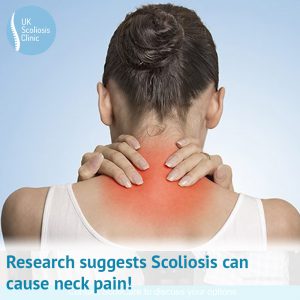 Perhaps the most obvious common features of the studies just discussed is their focus on back pain. This certainly sensible, after all, scoliosis primarily affects the thoracic and lumbar spine – but this does beg the question – what about neck pain?

Studies examining scoliosis and neck pain are much more sparse, however, at least one 2017 study[8]does provide some useful insight.

One thousand sixty-nine adults with a mean age of 40 years, diagnosed with idiopathic scoliosis in youth, answered a questionnaire on neck and back problems. Eight hundred seventy of these answered the same questionnaire on a the second occasion in a mean of 4 years later. Comparisons were made with a cross-sectional population-based survey of 158 individuals. Statistical analyses were made with logistic regression or analysis of variance, adjusted for age, smoking status, and sex.

The results were telling – Individuals with scoliosis (either treated or untreated) had a higher prevalence of neck problems –  42% compared to 20% of the control group (non-scoliosis patients). Interestingly, the study also showed that there was no correlation between the methodology used to address the scoliosis, or by the age of onset of scoliosis; juvenile or adolescent – which suggests the risk is the same regardless of how you approach scoliosis treatment.

Given the prior interest in back pain and scoliosis, this study also provided some interesting information on the two as a combined issue  – if neck and back problems were taken together, then the percentage of scoliosis patients experiencing problems increased to 72% , while the control group rose to 37%.  Of the individuals with scoliosis having neck problems, 81% also reported back problems, compared to 59% of the individuals in the control group.

Given the research which has already taken place on back pain and with this 2017 study in mind, it seems fair to suggest that neck problems are more prevalent, and more often coexist with back problems in individuals with idiopathic scoliosis than in non-scoliosis patients – and indeed, many scoliosis patients seem to suffer from both of these issues.

For us as a clinic, this stands out as an area for further study and research – it perhaps telling that the current version of the widely used and validated Scoliosis Research Society (SRS)-questionnaire (at the time of writing) does not even include questions on neck pain.

At the UK scoliosis clinic, we do take pain into consideration when diagnosing and treating scoliosis – and as a broad-based clinic dealing with multiple complex postural issues, we have other screening tools on hand to assess and monitor neck pain, however, going forward it may well benefit the field for neck and back pain, to be considered with greater weight when diagnosing scoliosis.

[8] Christos Topalis, Anna Grauers, Elias Diarbakerli, Aina Danielsson and Paul Gerdhem, Neck and back problems in adults with idiopathic scoliosis diagnosed in youth: an observational study of prevalence, change over a mean four year time period and comparison with a control group Scoliosis and Spinal Disorders 2017 12:20