Leg length discrepancy, commonly known as a short leg, and medically known as Anisomelia is a condition in which one leg is shorter than the other, resulting in a limping gait and often chronic lower back pain.  In fact, a small leg length discrepancy is not unusual and is frequently treated by specialists such as a chiropractor – however, Anisomelia is said to occur if there is a difference of over 1cm, and surgery can be necessary for differences over 2cm.[1] 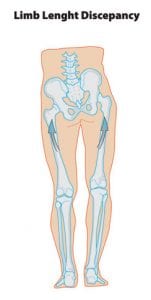 A short leg can cause scoliosis

Leg length discrepancy (LLD) has been observed in between 3–15% of the population[2] and there are two possible types, apparent or true.

True LLD is where the shortening of one leg compared to the other can lead to scoliosis as the body tries to compensate. In this case, scoliosis will usually reduce when the LLD is treated.

Because of these relationships, it has long been suggested that True LLD can cause or worsen scoliosis[3] – despite this, there had not been any definitive studies on the relationship between LLD and scoliosis until this year.

How common is LLD in scoliosis patients?

Despite  the fact that many health professionals see a link, information on the exact relationship of LLD to scoliosis has been difficult to obtain and studies have produced mixed results.  One study of 23 young adults[4] suggested that scoliosis was minor in patients with discrepancies of < 2.2 cm. At the other end of the scale, another study measuring the x-rays of 106  patients in a private chiropractic practice showed that those with LLD > 6 mm often (53% of the cases) had scoliosis and/or abnormal lordotic curves.

Does LLD cause scoliosis?

With this background in mind, a 2018 study[7] aimed to find out if there is a measurable association between pelvic obliquity, LLD and the scoliotic curve in an adolescent patient or not.  The researchers also wanted to discover whether scoliotic curve progression was linked to different amounts of leg length discrepancy

During the study, seventy-three patients with an average age of 13.3 years at initial examination were given an X-Ray and then had this compared with a later follow up. Scoliosis was confirmed in all 73 patients. At initial examination, pelvic obliquity appeared in 23 (31.5%) patients with scoliosis, and LLD was identified in 6 (8.2%) patients with scoliosis and pelvic obliquity. The majority of the patients in the study were under observation for their scoliosis, allowing the researchers to observe the relationship between scoliosis and leg length.

At a subsequent visit, at an average of 2.8 years later, no significant change in LLD was observed, but a statistically significant increase in scoliotic and pelvic deformity was found.  The study, therefore, concluded that in the adolescent patient population with thoracic or thoracolumbar scoliosis, the LLD remains stable with growth but both the scoliotic deformity and pelvic obliquity continue to progress.[8]

So what is the relationship between LLD and scoliosis?

This most recent study suggests that in adolescent patients at least, LLD stays stable and does not seem to have a direct association with the progression of scoliosis. Having said this, the small number (6 out of 73, 8.3%) of patients with LLD in this study suggests that a larger sample set should be explored before drawing any firm conclusions.

Perhaps most importantly, the authors suggest that future research could focus on younger patients less than 10 years with LLD to detect early-onset scoliosis prevalence and how it changes with growth and treatment since it is entirely possible that LLD may have a more significant impact at this early stage.

For now, it seems advisable to conclude that LLD is just one of a number of conditions which can be associated with scoliosis, and certainly with spinal disorders more widely. If you or a loved one have noticeable LLD, it is advisable to see a spinal specialist.