While it’s true that Scoliosis is a major issue for younger people, the fact that scoliosis only affects them, or even primarily affects them isn’t quite correct. Today, for example, we know that at least one child in every school class will develop scoliosis – bud did you know that as many as 1 in 3 people over the age of 60 also suffer from scoliosis ? This means that scoliosis, while often more serious in younger people due to the high risk of progression, is actually far more frequently seen in older individuals.

The overs 60’s get scoliosis? 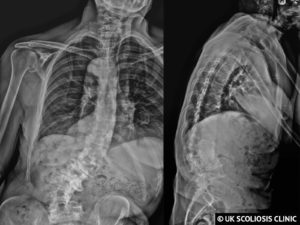 The over 60’s are certainly at a high risk of scoliosis, but you’d be forgiven for being unaware of this fact. Over the last 10 years, there has been much more interest in the treatment of adolescent and juvenile scoliosis – prominent cases such as that of Princess Eugene have certainly contributed to this attention as have numerous other celebrities who have openly discussed their childhood scoliosis. What’s been much less discussed is scoliosis in adults – a condition which primarily affects the over 60’s.
Unlike scoliosis in juveniles and adolescents (the exact cause of which is still unclear) we do know that De novo (or “new”) scoliosis is caused by wear and tear to the spine. Adults scoliosis is also worsened by wear and tear but is primarily the development of existing scoliosis, rather than an entirely new occurrence. Although the cause might be different, the symptoms are the same – scoliosis sufferers often notice undesirable physical symptoms, such as the Rib cage sticking out on one side, hips or waist sticking out and being unable to stand up straight easily. Scoliosis is also frequently the cause of back pain and discomfort, ranging from moderate to acute. Many suffers also have to live with pain in the legs or pins and needles due to nerve root pressure. That annoying back pain might, in fact, be the early signs of De-Novo scoliosis.

Does scoliosis in adults matter? 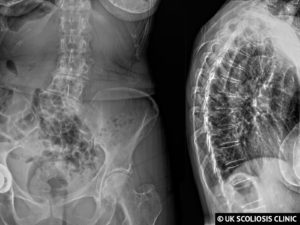 Just as with children, the key issue is the degree of scoliosis. A very small curve may present with few if any symptoms, but, if left untreated, scoliosis can progress to such an extent that normal physical function can be impaired – first making walking and moving about difficult, and then eventually even affecting breathing.
Many adults simply accept aches and pains as part of “getting older” – but no matter the case this isn’t a smart approach. The first reason for this is that small, but persistent, aches and pains can be the first sign of a more serious problem which requires treatment. The second and more important reason is that you do not need to live your life in pain! Pain itself, while once thought not to be correlated with scoliosis is now believed to have at least some link to the condition.
Where scoliosis isn’t painful, it may also cause difficulties with movement or a noticeable postural or physical deformation of the spine which for some people can be embarrassing and stressful. The overall result for most older adults is a reduction in their ability or desire to socialise, exercise and get about day to day. This is especially problematic given that research is increasingly showing that keeping fit and active is the key to ageing gracefully and enjoying a long and healthy life.

Can scoliosis in adults be treated?

The good news is that through the same treatment approaches which are being used to treat adolescent scoliosis today, its also possible to treat adult scoliosis. Historically, it was thought that only surgical treatment was effective in correcting scoliosis – so with many people unwilling to go under the knife, scoliosis has become a life-limiting factor for many of us. Today, however, conservative methods such as bracing and specialist exercise programs are a time, cost and risk effective way to treat the condition.
For smaller curves, a scoliosis-specific exercise program can be an ideal intervention but by far the best option is a customised scoliosis brace, designed to gently guide the spine back into the proper alignment. Far from the braces used many years ago, our cutting edge ScoliBrace is a low profile, comfortable brace which looks more like a piece of sports equipment than a medical device. Best of all, bracing has been shown to effectively reduce scoliosis and its symptoms, and in some instances can have a noticeable impact in a matter of weeks. Pain especially seems to be reduced through part-time bracing in older adults.

How can I get treatment for scoliosis?

While your GP might be the first stop for most conditions (and its certainly worth a visit to rule out anything more serious) there’s a limited amount that your GP can do for you through the NHS. Instead, speak with a spinal specialist, such as a Scoliosis Clinician. At the UK Scoliosis clinic, many of our patients are adult scoliosis sufferers – so if you suspect you may be suffering from adult scoliosis, why not give us a call today and arrange a consultation?