Given our name being the UK Scoliosis clinic you would expect or focus to be on the non-surgical treatment of scoliosis, however, we also work with many patients suffering from another common spinal condition – Kyphosis. But what’s the difference between Scoliosis and Kyphosis?

Kyphosis is the condition which causes what’s sometimes called a “hunchback”, people with this condition tend to hunch forward, and, as you may have already realised, it’s getting far more common today than ever before.

But isn’t the spine supposed to bend forward slightly? – yes, it certainly is, however, when this forward bend becomes too pronounced it can become an issue. As a general guide,  it’s normal to have a mid-back kyphosis (backward c-shape curve) at approximately 40 degrees. Above this, unpleasant symptoms may result.

Typically, patients complain of aching and stiffness in their mid-back and lower back. It worsens when weight-bearing, especially when doing activities that require repeated bending such as gardening. Often, teenagers are noticeably hunched from spending hours on their phones, tablet’s or PC’s – a trend which often worsens into adulthood. Most age groups are at risk of Kyphosis, although there is probably a stronger link with lifestyle than with age per se.

Like scoliosis, there can be different underlying causes of kyphosis, but unlike scoliosis, we understand these potential causes well. There are 4 main underlying issues which can lead to Kyphosis, these are:

Postural Kyphosis – is the most common form and the one which is increasing faster than ever before. Postural kyphosis is noticeable, in that it will appear when standing and sitting and disappear when laying face down. Postural kyphosis isn’t a structural problem caused by an abnormal shape of the vertebra that make up the spine, but rather by the supporting muscles and tissues. Over time, as we remain in a slouched position (such as sitting at a desk all day or hunched forward gaming for hours on end) certain muscles become too tight, others become weak and loose, leaving us with a “hunchback” look. Postural kyphosis, disappears when laying face down as the spine is able to return to its normal position, without the need the need for the surrounding muscles muscles to work and support the spine against the force of gravity. 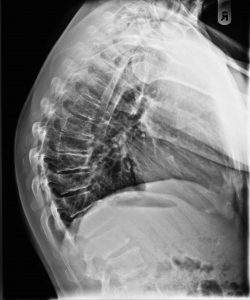 Scheuermann’s disease – is far less common, and results in an increased kyphosis throughout the teenage years whilst growth is occurring. It is a growth plate disorder in the vertebrae themselves, which causes them to become more wedged and compressed at the front, hence the increase in kyphosis. This will result in structural deformity as the bone formation is altered. Scheuermann’s cannot be “cured” or reversed, however, the right treatment at the right time, can help to significantly reduce the progression of the deformity. Bracing in the right cases has been shown to be a very effective treatment when combined with specific posture exercises. 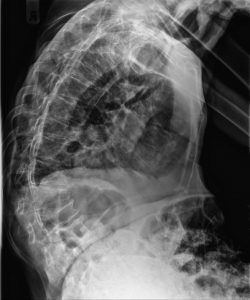 Osteoporosis of the spine – is a common cause in older individuals – here, the fundamental cause is vertebrae undergoing compression fractures due to a loss of bone strength. Osteoporosis of the spine can cause a large increase in the kyphosis in people over 60. It will often continue to progress with age, thus it is vital that patients keep their posture upright and keep their bones strong for as long as possible. While again, this condition is not “curable” the right management can make a huge difference to the quality of life.

Spinal malformations & birth defects – account for the majority of the remaining Kyphosis cases – there are a number of conditions which can cause the vertebra to not develop properly. Depending on the underlying condition and the severity, it may need surgical intervention.

In most cases of Kyphosis, the condition can be treated effectively with specific postural correction exercises & stretches, postural traction and kypho-bracing when necessary. Advanced manual approaches such as Chiropractic Biophysics can be highly effective in resolving Kyphosis cases. Beyond initial treatment, the same approach can be used to manage and reduce the severity of symptoms, often so that the impact on daily life is very little. Only in very severe cases is surgery typically required, and this is usually due to the risk of progression and further complications. Many cases of postural kyphosis can be improved or resolved.

The pictures below show the correction in an adult male with hyper-kyphosis, through the Chiropractic Biophysics technique. The pictures are approximately 1 year apart. 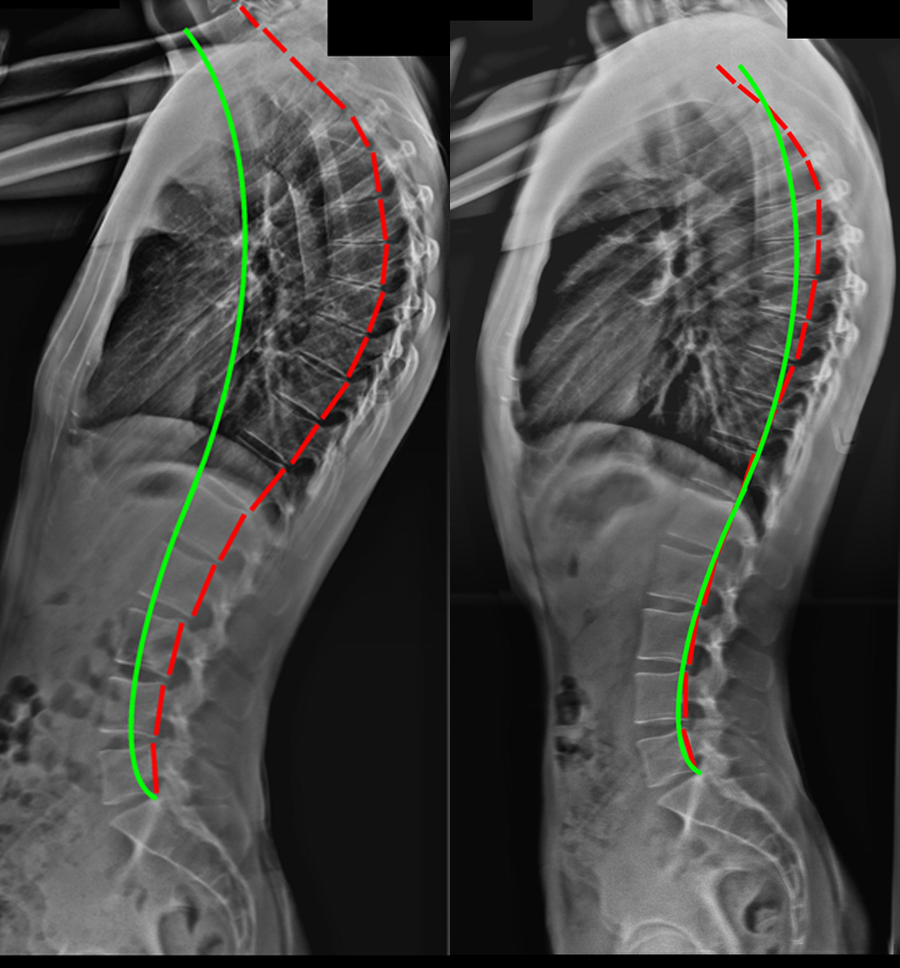 Scheuermann’s disease, and cases related to osteoporosis in particular, can often benefit from part-time bracing with a specialised Kyphosis brace, such as Kyphobrace – in these cases, a “cure” is not possible, but with proper management, it is entirely possible to live a normal and healthy life with Kyphosis.

Whereas Kyphosis causes “forward hunching” posture, related to an excessive forwards bend in the spine, scoliosis causes a side to side curvature of the spine resulting in a distinctive scoliosis profile.

Unlike Kyphosis, Scoliosis tends more often to be a serious condition which, in most cases, progresses (sometimes rapidly) without proper treatment. While Scoliosis can cause pain, it does not always, and in many cases it is only detected through screening or is noticed by friends of family members during a trip to the beach or when changing clothes. Whereas Kyphosis is quite easy to spot. Scoliosis can progress to a significant degree without any obvious signs, so screening is a very good idea to enable early detection.

Whereas the causes of Kyphosis are well understood, and (with a bit of planning) you can reduce your risk through targeted exercise and fitness approaches, most cases of scoliosis have no known cause – in a large number of cases, the condition is described as ”idiopathic” – literally meaning “without known cause”.  The underlying pathologies are therefore:

Idiopathic scoliosis – Idiopathic scoliosis is most commonly found in younger teenagers, with the most at-risk group thought to be between the ages of roughly 11 and 16. Girls are affected more often than boys, but boys can and do develop scoliosis.  While the cause is not currently known, research suggests that genetics may play an important role. It’s also believed that participation in some activities such as ballet or gymnastics, in which there is a contortion of the spine, may hasten or promote the development of scoliosis.

Degenerative Scoliosis – Degenerative scoliosis is a condition typically seen in people over the age of 60. In this case, we do know the cause – degenerative or “de novo” scoliosis is simply caused by wear and tear as we age, involving changing in the shape of the vertebrae and weakening of the spinal ligaments and muscles enabling the vertebrae to twist and turn.

Scoliosis from other causes – Other, less common causes of scoliosis include congenital deformities and problems with the formation of the spine such as hemi-vertebra or butterfly vertebra, and are usually present from birth. Other cases may be caused by underlying neurological and syndromic conditions that may or may not have already been diagnosed.

Scoliosis in older individuals (de novo scoliosis) cannot be “cured”, in the same way as kyphosis in older individuals cannot be “cured” – however, similar approaches can be used to significantly reduce the impact of scoliosis on one’s life, and in some instances, it is also possible to reduce the scoliotic curve itself. Scoliosis bracing can be highly effective as a means to achieve this and has also been shown to reduce pain where it exists.

Scoliosis in younger individuals is almost invariably a case of idiopathic scoliosis – the treatment for this depends on the severity of curve at time of diagnosis, but in all cases, the objective is to straighten the spine as much as possible. In cases which are caught very early, when the curve is still small, scoliosis can sometimes be corrected using scoliosis specific exercises – a regime of scientifically based movements and stretches designed to counteract the scoliotic curve. In very young patients (who are not able to perform scoliosis specific exercise) or in larger curves, scoliosis bracing is the preferred method of treatment. While bracing results vary according to the brace type that is used, today a very high number of cases treated with corrective bracing achieve a reduction of the curve down to a “normal” scoliosis value.

Is it Scoliosis, or Kyphosis?

If you’re unsure about an unusual posture or spinal issue you have noticed, an excellent place to start is a professional consultation at the UK Scoliosis Clinic, just get in touch!