Regular readers of this blog will know that at the UK Scoliosis clinic, we believe that scoliosis bracing is the best approach to reducing cobb angle in the majority of scoliosis cases, and indeed, it is becoming clear from larger-scale studies that this is the case. [1] 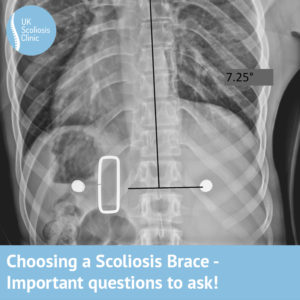 It’s certainly true that some smaller degree curves can be effectively treated with exercise approaches alone, however even these cases treatment with a brace will often be faster, and much easier in terms of effectiveness and compliance with younger patients.

In many instances then, parents of patients or patients may find themselves interested in the idea of bracing, but unsure about which type of brace will be the most appropriate. This week, let’s look at the factors you may want to consider when choosing a brace, and questions you may want to ask your scoliosis bracing practitioner.

Once upon a time, the only kinds of scoliosis brace available were what are now known as “passive” braces – these include models such as the “Boston brace”. Passive braces are not really intended as a treatment for scoliosis, instead as a method to slow its progression. Passive braces work by holding the spine in its current, scoliotic position – this can slow and perhaps stop the progression of the condition but will do nothing to reverse it, and therefore nothing to alleviate the symptoms.

Passive braces are still offered by some clinics and are sometimes provided via the NHS – we would strongly recommend that you avoid passive braces since in the long run they will not improve the condition.

The below image shows a adolescent with idiopathic scoliosis, with a right thoracic curve measuring 49.50 degrees out of brace, and in the second X-ray (with a passive brace on)  shows the curve as almost the same, as the goal of a passive brace is too just hold the current spinal position not straighten the spine. 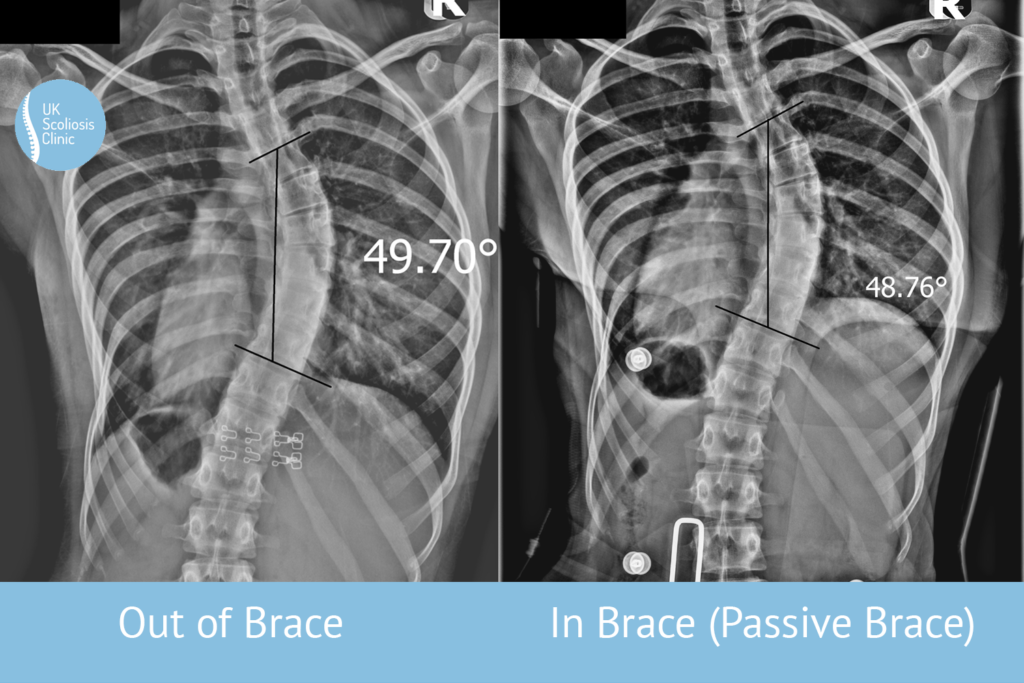 Active braces, such as our recommended model, the ScoliBrace, are the opposite – over time they are designed to gently guide the spine back into the correct position so that the longer the user wears the brace the greater their spine correction will be.

The below image shows a right thoracic curve similar to that of the first patient – The curve measured 41 degrees – however, this time when the In-brace x-ray was taken,  the curve reduced to 13 degrees. 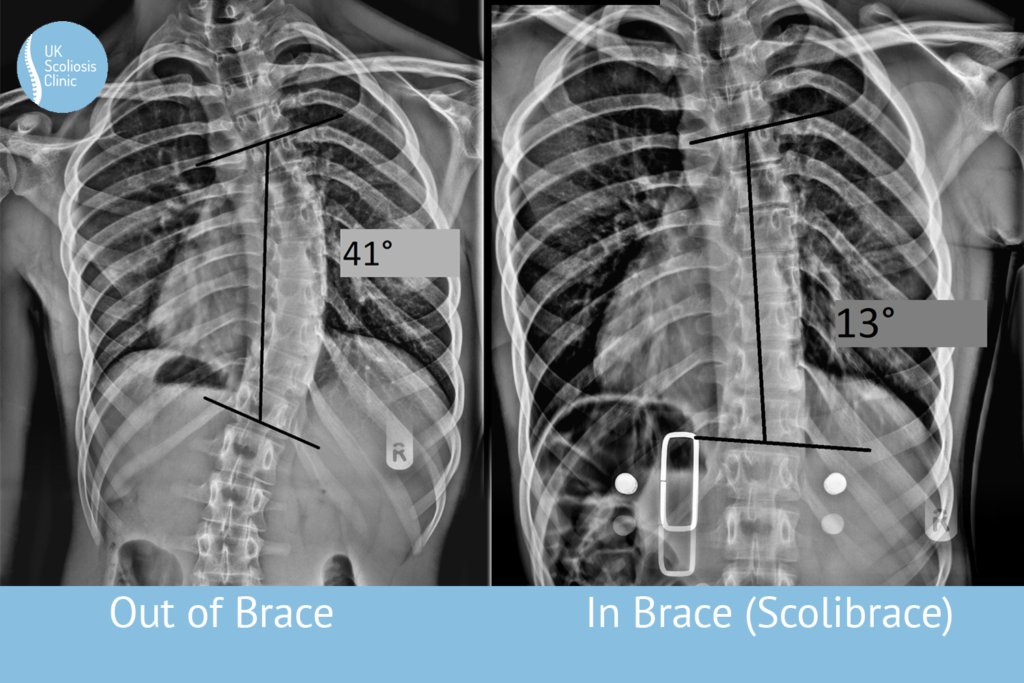 Most modern scoliosis braces are designed using a CAD/CAM process and are therefore perfectly fitted for their users – this makes the majority of models low profile, but low profile braces are not necessarily also flexible braces. Braces such as Scolibrace are designed to be minimally restrictive when being worn and even allow the user to participate in sporting activities while wearing the brace. This may be more or less of a factor depending upon your lifestyle, but it worth keeping in mind.

A big factor differentiating the cost of modern braces is their durability for use over the course of scoliosis treatment. Some cheaper scoliosis braces are manufactured to fit your body at a specific time and for a specific degree of correction only. Once you have either outgrown the brace, or you have reached the maximum degree of correction which the brace can provide, a new brace will need to be fitted. If your case is not a severe one, a single brace may be enough to correct your scoliosis – but many patients will end up paying for multiple braces, thus driving up longer-term costs when non-adjustable braces are used.

An alternative (albeit an alternative which will be slightly more expensive upfront) is an adjustable brace. Scolibrace falls into this category and allows for periodic adjustment and augmentation of the brace to allow it to follow along with your scoliosis correction. Patients with significant curves may still need more than one scolibrace, but by contrast, 3 or even 4 fixed shape braces would certainly cost more in its place.

In the picture below you can see the effect of a corrective brace pad reducing the curve from 13 degrees down to just 7.5. 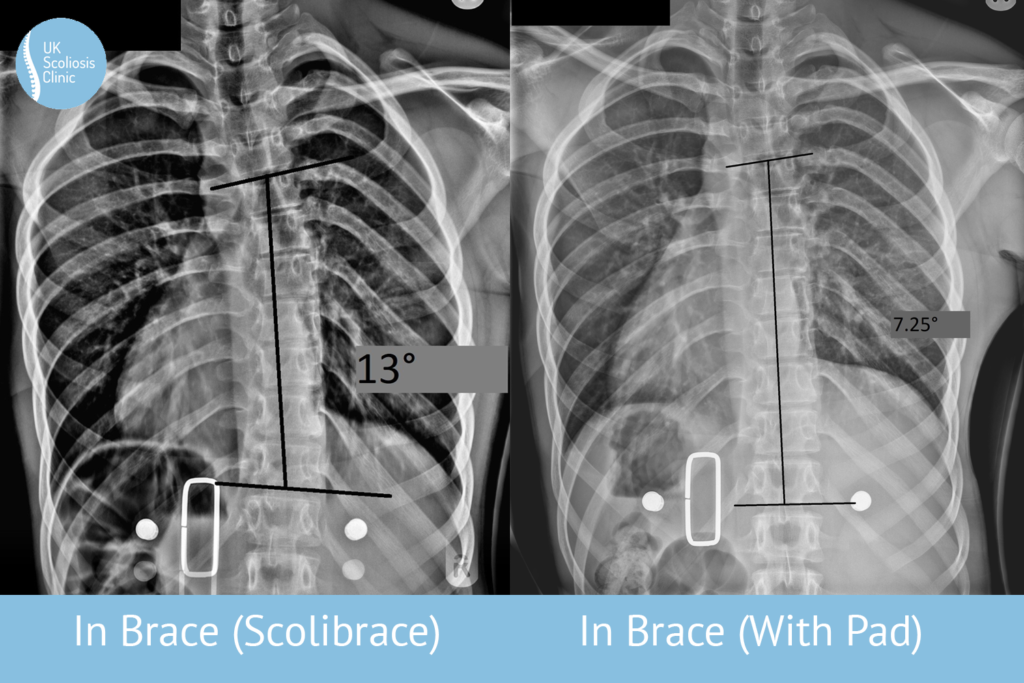 An often-overlooked factor for scoliosis braces is the ease with which they can be put on, or taken off. Depending on your treatment protocol you may only need to wear your brace for a certain part of the day, only at night or may be able to take the brace off for physical activity. This is, of course, only possible if the brace is easy for the user to take it off, or put it back on!

Pay special attention to this factor if you live alone, or have children who require a brace, since a brace which is not correctly fitted will not do its job!

While style probably isn’t the best criteria to judge the success of a brace by, compliance  – that is to say how often patients actually wear the brace – is certainly a major factor. Braces such as Scolibrace are available in a range of colours and patterns so that they can either be produced in a style which matches your own preference, or in colour designed to blend in under clothing, especially school uniform.

[1] Yu Zheng, MD PhD et al. Whether orthotic management and exercise are equally effective to the

SPINE: An International Journal for the study of the spine [Publish Ahead of Print]