For some time, it has been thought that adolescent idiopathic scoliosis (AIS) does not necessarily cause back pain – however research is now beginning to indicate that in fact, scoliosis does most likely cause pain especially in patients with larger curves.

Scoliosis and back pain, current opinion 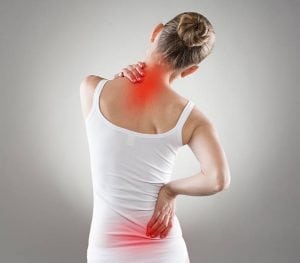 Research is unclear, but many believe scoliosis causes back pain

For some time, it has been suggested that scoliosis might be responsible for back pain. Although the issue has been debated, some evidence suggests there is a link – A recent study of almost 2000 patients less than 21 years-old referred for a spine evaluation reported that when an underlying condition was identified as the cause of the pain, the most frequent diagnosis was scoliosis (1439/1953), followed by Scheuermann’s kyphosis.[1]

Although this evidence suggests there may be a link, other studies which have considered the issue have produced mixed results. On the one hand, Ramirez et al. reported on more than 2400 subjects with AIS. Of these, 23 % reported back pain at the time of diagnosis – a substantial number. An additional 9%, initially free of pain and managed with observation alone, developed pain during follow-up[2].

Sato et al. examined more than 30,000 adolescents with various spinal issues and concluded that the subgroup with scoliosis had an approximately 3 to 5 fold increased risk of back pain in the upper and middle right part of the back[3].

On the other hand, Lonner et al. compared three groups of adolescents including 894 with AIS and 31 control individuals without, when considering pain score using the SRS pain score method, they found that the differences between the AIS and control group were not significant. [4]

With this mixed picture in mind, one 2016 review concluded that while back pain in adolescents is quite common, especially in girls – pain does not seem to be a major problem for the vast majority of adolescents with an idiopathic form of scoliosis.[5] This is the view which tends to prevail amongst most scoliosis practitioners today.

Despite this conclusion, however, there have been a number of studies which have suggested much more strongly that back pain is a common issue amongst scoliosis sufferers. Research has indicated that chronic nonspecific back pain (CNSBP) is frequently associated with AIS, with a greater reported prevalence (59%) than the one seen in adolescents without scoliosis (33%)[6]. Furthermore, Clark et al. reported that participants who were diagnosed with AIS at age 15 were 42% more likely to report back pain at age 18.[7] 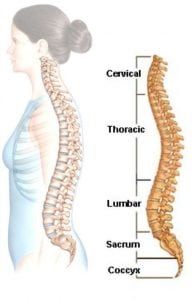 The regions of the spine

The most recent research is a Canadian study by Théroux et al.  It considered 500  patients from the orthopedic scoliosis outpatient clinic from the CHU Ste-Justine Centre, a university-teaching paediatric hospital with a view to exploring the relationship between scoliosis and back pain more accurately.

The conclusions from this study were of great interest. The study showed that spinal pain was a frequent problem for the AIS sufferers included in the study.  Overall, 68% of the participants reported pain. Furthermore, pain intensity increased with scoliosis severity in the main thoracic and lumbar regions – the degree of disability caused by pain was also positively associated with scoliosis severity in the proximal thoracic, main thoracic and lumbar regions.[8]

Perhaps of most interest for us as a clinic, the results showed that spinal bracing was associated with lower spinal pain intensity in the thoracic and lumbar regions. Bracing was also related with lower disability for all spinal areas. [9]

Does scoliosis cause back pain?

More research will be needed before a definitive answer can be provided to this question – however it seems reasonable to suggest that back pain is associated with scoliosis in a good number of cases, given our own experience and the foregoing evidence, we would suggest a repetitive figure for the risk of back pain associated with scoliosis is likely to be  40 – 50% , with factors such as curve location being key factors.

Thankfully research and our own experience clearly indicates that proactive scoliosis treatment, whether with bracing or (ideally) a combined bracing and exercise program can be highly effective in reducing back pain in scoliosis cases.