As you may – or may well, or well not ­– be aware, June is Scoliosis awareness month. Since so many of us are working from home, or simply having to take a break from normal life at the moment, you may well have noticed some talk about this online, so, what is Scoliosis, and why should be you be aware of it?

Simply put, scoliosis is a spinal disorder which causes the spine itself to be curved from side to side. A normal spine does indeed have a forwards and backwards curvature, so that viewed from the side it looks like an “S” shape – but in scoliosis, the spine also has a side to side curvature, so that viewed from the front or the back, it has an “S” or “C” shape. In fact, scoliosis is more complicated than this – there’s typically also a rotation of the vertebra (the spinal bones), but the general shape is what you might be able to notice in someone’s posture.

Can I see Scoliosis? 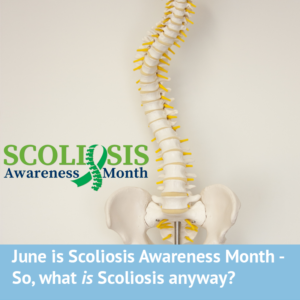 Scoliosis is sometimes possible to see, usually in more severe cases. In some individuals with very low body fat, it may be possible to notice the curvature of the spine – however, most common signs (like uneven shoulders and hips, or a rib hump when bending forward or one shoulder blade seeming to stick out more than another) tend to be the only noticeable change. It’s true that the worse a scoliosis case is, the more visible it will tend to be – but scoliosis can remain almost invisible for a long time before reaching this point.

Who can get Scoliosis?

Anyone can get scoliosis – on average, about 3% of children will develop scoliosis, whereas some forms of scoliosis, common amongst the older population can affect up to 30%.[1]

There are many different sub-types of scoliosis, but for ease of explanation we typically divide them into two groups – these are adult, and childhood scoliosis.

Adult scoliosis is caused either by the degeneration of the spinal bones, ligaments & discs with age or as a result of childhood scoliosis which was not treated. Childhood scoliosis (affecting infants through to young adults) is more of a mystery – right now the exact cause for about 80% of cases is unknown. This is termed “Idiopathic” scoliosis. The remaining 20% of cases are typically caused by congenital or genetic conditions, spinal malformations, underlying neuromuscular conditions, metabolic conditions or trauma.

Idiopathic scoliosis in children is typically classified according to the age that it is diagnosed. It is most common in adolescents (over 10 years) but also occurs in infants (under 3 years) and juvenile’s (3-10 years).

Approximately 3-4% of children are affected by scoliosis, that’s about one in each class at school. In adults over the age of 50, this figure increases to 30-40%.

The earlier scoliosis is detected, the more effective a treatment and management plan will be. This helps reduce the risk of progression and the potential need for surgery. If scoliosis specific exercise and/or bracing are used early enough in the development of scoliosis, curve progression can be stopped, and surgery avoided. In some cases, near-complete correction of the curve is possible.

How do I screen for scoliosis?

Screening for scoliosis is easy to do and takes less than 5 minutes – remember that early detection is the most important factor, so screen regularly and if you have concerns, get in touch with a scoliosis professional.

[1] Scoliosis in adults aged forty years and older: prevalence and relationship to age, race, and gender‘